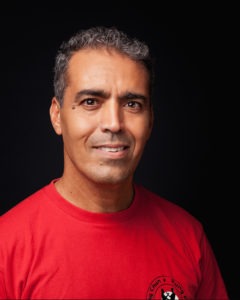 He teaches Wing Chun Kung Fu, self défense, Qigong, and personal development since 2005 in Nice.

His martial path lead him to practice multiple disciplines.

From 2010 to 2014: Wing Chun of Grand Master Chu Shong Tin with  internal and energetic tendencies (multiple study trips to Hong Kong and Foshan). Private lessons with Sifu John KAUFMAN and other disciples of GM CST.

Teaching of Snake Crane Wing Chun for the first time in Europe since early 2015. Participation in a historical trip in October 2015, following the traces of the art near Foshan in southern China, with a delegation of different countries.

Today Ridha LHIBA is dedicated to teaching a synthesis of everything he has been able to acquire during these different phases of learning. His teaching style isn’t limited to the martial and self defense aspect of Chinese martial arts, but goes further to contribute to the personal development of his students.